Home » Music First: Why the Work is Worth It 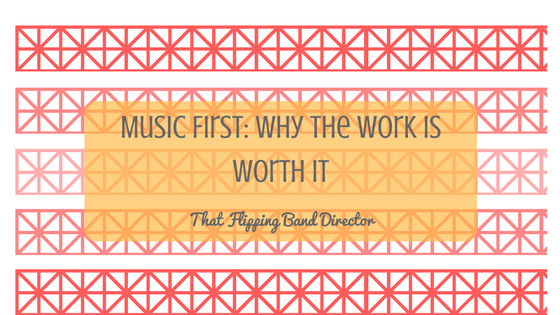 I don’t know about all of you guys, but omg school. The busy hit hard these past two weeks! Even though it has been crazy, I have been just so happy to see the kids – school is SO much better with them there and I seriously missed them over the summer (especially during inservice week).

If you are just tuning in, we are rolling out Music First with all of our students in all class periods this year. Last year we did just the pilot with my microscopic flute class that went well. I am SO glad to be able to use this incredible product with all of my students for this school year! I would be lying if I didn’t tell you that one of the reasons for the craziness of the start of this year was getting Music First functional for all of the students. Truth be told, we are still working out kinks, getting students to log in, and helping everyone figure out their system for accessing this online classroom. Has it been a lot of work? Yes. Will it be worth it? Without question.

“But Marianne,” you say “How do you know it will be worth it so early on in the school year?”

Why is it worth the work?

Well, I like to tell my students that I am magic – mostly when I can fix a broken instrument or take off the bell of a swollen clarinet 🙂  but that’s not it. I’ve also been doing online instruction with my classes for about 5 years now, so I do know that it is effective and awesome…but that’s not it either. Here’s how I know: they are practicing with Music First. AND I know that they are practicing because I can see it online!

Like I was saying, we are still working out some kinks (which should be expected when adding a new element to anything). During the summer, I started putting in some technique exercises to MuseScore (which I LOVE) and then uploading them as assignments for my students in Practice First (the practice software component of Music First). I even placed them onto the class calendar and had due dates for them. In the wake of the first weeks of school, I honestly forgot about them and just wanted kids to log on at all. Talk about lowered standards – hah! Then, last night, I was adding and making visible their assignments for next week and lo and behold, my students had completed their first technique assignment! Now, let’s not get crazy – they didn’t all do it yet – but some did! That is the spark that starts the flame, my friends.

I didn’t even get to the coolest part yet! As I looked at their submissions and listened to them playing these short exercises, I saw the “number of attempts” that each student had made before finally choosing which recording they thought was best to submit. The numbers were 30. 32. 27. (among others) WHAT? How did this magical program get middle school children to practice something 30 times? This, friends, is why Practice First is great! It encourages practice and trains young musicians how to practice. Practice First is their practice buddy that can tell them if they are doing something wrong. It can demonstrate for them and it can guide them. The program is not just playing along with them.
I know that Music First will have a huge impact on my students because it has nurtured real practice for mastery in middle school students on the second week of school. #winning