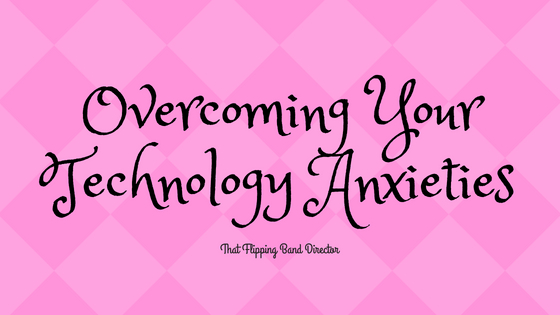 Anxiety about something new is normal

….and part of being a human being! Now, I’m talking about the kind of anxiety that just makes you uncomfortable, not anything more serious than that. And perhaps anxiety is too strong of a word to use to describe this level of discontent, but I think that it speaks to all of us in a way that we can relate to on some level. Trying something new as we get older is less and less appealing. I see a lot of educators with technology anxiety in particular. I have a simple solution for you that will help overcome those technology anxieties that is based on some observations I made with my own technology students recently…

One of my biggest projects over the last couple of years was teaching an online music technology course through Texas Tech University. The course is catered towards undergraduate students and is open to all majors (yikes!). My students, thankfully, were all musicians studying to teach, compose, and perform, among other things – though my students were all unique in their musical skills and needs, I was so grateful to not have to teach anyone what a quarter note is! 🙂 Thinking back, though, it wouldn’t be that much more of a challenge to have students with little to no musical background. All of the material absolutely would make much more sense to even a minimally educated musician, however.

As you might be able to imagine, there was A TON of material to cover in just one semester and it was my goal to give my classes skills, knowledge, and information that they could practically use no matter what their future career path is. Along with learning how to create a personal website, we spent a lot of time programs like GarageBand (all students were issued a school owned MacBook for the course), and Finale. We overviewed MIDI input and manipulation, recorded sound manipulation, and how to put all of the puzzle pieces together for a larger and cooler product. This is an EXTREME nutshell version of the course!

Takeaway: I LOVED it and am excited for the opportunity to do it again this year!

A couple of weeks ago, I spent the week at Texas Tech University in Lubbock, Texas to work with the annual Texas Tech Band and Orchestra Camp – it is pretty much always my favorite week of the summer (or at least it’s up there on my list!). While I was working in a mostly supervisory role this year, I also had the FUN opportunity to teach two elective classes titled “Music Technology”. The School of Music at Tech has a set of chromebooks so the set up was perfect for these kids to get some basic music technology skills.

I decided to take a leaf from the University course that I teach when making my plans for these middle school and high school aged campers that I worked with. Knowing that these students would be doing all of their practice on the chromebooks, I needed to find programs to use that didn’t require much memory, ideally web based, and I wanted to find programs that were free so that they could use them on their own devices if they wanted to.

The classes went well and the students seemed to really enjoy themselves!

Due to the way that the ensemble schedules worked, I had mostly high schoolers in my first class of the day and mostly middle schoolers in the second class of the day. On day one, the basic level of conversation was (as I expected) MUCH higher in the middle school class – haha – these are my people and I love them! The high schoolers were much less willing to make new friends for whatever reason (maybe because it was 8AM). On that first day, we went through the different “experiments” in the Chrome Music Lab – if you want to get lost in some online play, look it up! I had my own computer screen projected to show them how an “experiment” works and then I would let them all try it on their own for a couple of minutes before moving on to the next one. Occasionally I would ask if anyone wanted to play for the class what they created.

High School Class: would play and then quickly put eyes up on the screen if I needed to show them something. No one played while I was talking – there was no computer noise. No one wanted to move on early – they were all interested in watching me show them how it works first. None wanted to play what they made for the class. All very interested in the processes and put forth great effort!

Middle School Class: would play and become lost in it, hard to grab attention back unless I captivated them with the next thing, nearly always computer noise – lots of reminders to pay attention. These students would even move on without me to discover the next cool thing on the Music Lab. Nearly all would volunteer at the opportunity to play their creation for the class!

This trend continued throughout the week – when we started Soundation, the older students were very happy to just follow my lead while the younger ones were quickly, and without prompting, importing their own tracks from Fanburst (something we didn’t even go over) and creating their own music. Similarly, when we moved to Noteflight and I showed them how to export their Noteflight composition as a midi file to put into Soundation the middle schoolers were all about it while the high schoolers were more comfortable staying just in one platform or the other.

Now this is should not be read as “middle schoolers are more creative/better/etc. than high schoolers”. My observation was that, in general, younger students were more willing to experiment with something new.

There is something interesting that happens as humans age: we move from a mindset of “I can try this and anything/everything else!” to “I feel confident doing x,y,z, but I am leery of trying this new thing because I might not be as good”.

I felt honored to witness this first hand in such an interesting way that week! I saw the bright eyes and courageous attitudes in the younger students and also saw that fade a little bit as I worked with the older ones who were still trying their best, but were less courageous. In my collegiate class, I see that lack of confidence even more. Some students even say right off the bat that they are “not good at technology” in general. Maybe you feel that way. I definitely do sometimes! I have to make a conscious effort to think positively about my abilities in being effective on social media in particular -it’s something that I work to overcome.

I know a lot of educators feel a lack of confidence (slight anxiety) in many varying technology tools. Based on my very small sample sized observations, THIS IS COMPLETELY NORMAL!  If you can learn to embrace that little lack of confidence and push through it, you might just be able to learn something incredible for you and your students.

I offer you this simple solution: recognize that yes, you are going to feel uncomfortable trying this new thing.

Then, do it anyway.

Do it in the safety of your house first – do it somewhere that a mistake won’t matter. Practice it, and then try it somewhere bigger. Don’t let it bring  you down; overcome your hurdle!

I hope that if I can help enhance your technology efforts you’ll reach out. You might also gain some confidence in reading some of my classroom technology guides elsewhere on this site. Stay in touch and remember that I believe in you!